Cemex changes its US profile

Cemex pushed ahead yesterday and announced that it had sold the Kosmos Cement Company to Eagle Materials for around US$665m. It owns a 75% stake in the company, with Italy’s Buzzi Unicem owning the remaining share, giving it roughly US$449m once the deal completes. Proceeds from the sale will go towards debt reduction and general corporate purposes. The sale inventory includes a 1.7Mt/yr integrated cement plant in Louisville, Kentucky as well as seven distribution terminals and raw material reserves.

The decision to sell assets makes sense given Cemex’s financial results so far in 2019. It reported falling sales, cement volumes and earnings in the first nine months of the year although much of this was down to poor market conditions in Mexico. However, the US, along with Europe, was one of its stronger territories with rising sales. Earnings were impaired in the US, possibly due to bad weather in the southeast and competition in Florida, but infrastructure and residential development were reported to be promising. 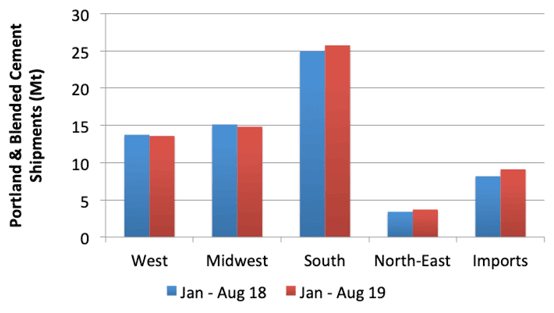 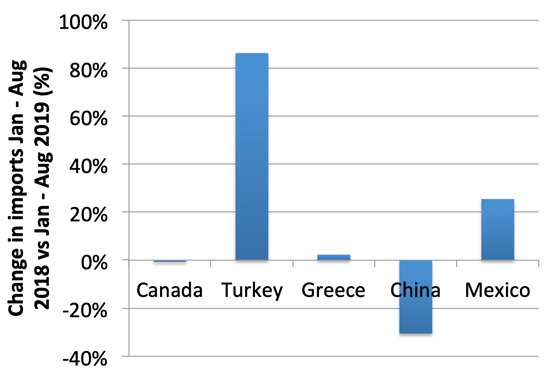 Graph 2: Change in imports of hydraulic cement & clinker to the US in 2018 and 2019 from selected countries. Source: USGS.

United States Geological Survey (USGS) data also supports a picture of a growing US market. Shipments of Ordinary Portland Cement and blended cements grew by 2.4% year-on-year to 66.9Mt for the first eight months of 2019 from 65.4Mt in the same period in 2018. By region growth can be seen in the North-East, South and imports. Declines were reported in the West and Midwest. The states of Alabama, Kentucky, Tennessee – the area where the Kosmos plant is located – saw shipments grow by 4% to 4.77Mt from 4.58Mt. It is worth noting that Louisville is in the north of Kentucky near the border with Indiana, where shipments also grew.

The Portland Cement Association’s (PCA) fall forecast may also have helped Cemex’s decision. Ed Sullivan, PCA Senior Vice President and Chief Economist, said that he expected cement consumption in the US to continue growing in 2019 and 2020 but with a slowing trend into 2021 following general gross domestic product (GDP) predictions. The PCA’s view is that pent-up demand following the recession in 2008 was gone and the economy was gradually weakening. Crucially though it didn’t think a recession was impending. In this scenario Cemex might be taking a medium-term view with regards to the Kosmos Cement Company.

Another more general interesting data point from the USGS was the change in import origins to the US. Imports grew by 11.3% to 66.9Mt in January to August 2019. The top five importing countries and their overall share remained the same but there was some movement between them. Turkish and Mexican imports surged at the expensive of Chinese ones as can be seen in Graph 2. The go-to explanation for this would be the on-going US - China trade war. Cemex is a Mexican company with a strong presence in both the US and Mexico. This change in the make-up of the import market in the US may also have informed its decision to sell Kosmos Cement as it looked at the macro scale.

More generally the US market is looking buoyant in the short to medium term. Plants are being sold like Kosmos Cement to Eagle Cement and the Keystone cement plant in Bath, Pennsylvania to HeidelbergCement and a major upgrade project is underway on the new production line at the Mitchell plant in Indiana. In Cemex’s case, as ever with asset sales, the seller sometimes has to make the hard decision of whether to divest a plant in a growing region to help the business in other places that might not be doing so well. The growth of America’s largest locally owned producer, Eagle Cement, may also give cheer to the US’ current ‘America First’ administration.