As India reaches two weeks into its 21 day lockdown to combat coronavirus, the financial analysts are starting to publish their forecasts as to what the effects will be for the cement industry. The results are gloomy, with demand predicted to drop by up to 25% in the financial year to March 2021 by one analyst and 40% in March 2020 alone by another. 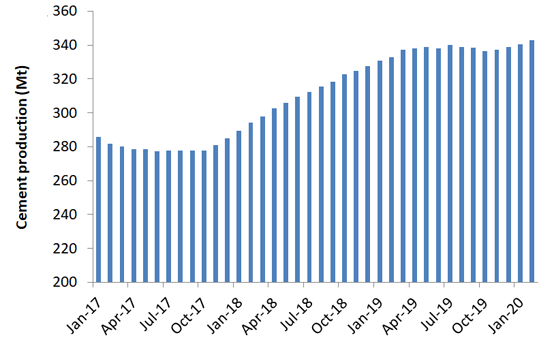 The graph above sets the scene for what may be to come by showing the state of production in India in recent years. From early 2018 it picked up by 17% to 337Mt by March 2019 and stayed around there through the rest of year before breeching 340Mt in January and February 2020. The (relative) lull in production growth in 2019 was blamed by some analysts on the general election in mid-2019 and then the monsoon rains. In summary the market was improving and seemed set for further growth in 2020. Alas, this does not now seem to be the case.

Looking ahead, Rating’s agency CRISIL has published a research paper on the topic and here are some of the highlights. They break the damage down into two separate scenarios. The first, where the social distancing measures last until the end of April, cause a 10 – 15% fall in cement demand with the pain limited to the first quarter of the Indian financial year, which starts on 1 April. The second, where distancing measures last until June, cause a 20 – 25% decrease in demand, with the problems extended into the second quarter. Salient points that it makes about the anticipated recovery include a delay in infrastructure spending due to the government diverting funds to healthcare, reduced private and real estate markets and a divide between state-led affordable housing schemes in urban and rural areas. It pins its hopes on rural housing to grab demand first, followed by key infrastructure projects, especially transport schemes.

Examining the cement producers directly, CRISIL reckons that prices will fall in the face of dropping demand but that power, fuel and freight costs are all expected to fall also. Profit margins are forecast to drop compared to the 2019 – 2020 financial year but still remain higher than the two previous ones. Finally, it looked at the credit profiles of 23 companies, representing over 70% of installed production capacity. Together they had a total debt of US$7bn. It flagged up four of these companies as having high debt/earnings ratios and five with low interest coverage. The latter were described as ‘small regional firms with weak cash balances.’

That’s one view on what may happen but two recent general industry news stories offer snapshots on what may be to come for the Indian market. The first is an immediate consequence of a nationwide lockdown in a country with a population of 1.3bn and a low cost of labour. 400 construction workers at a grinding plant build for Ramco Cements in Haridaspur, Odisha, were stranded at the site when the quarantine restrictions stopped them travelling home to Bihar, Jharkhand and West Bengal. They took up residence at the building site and then protested when the food ran out. This point about migrant labour is noteworthy because how the Indian government relaxes the lockdown could have massive consequences upon how the construction industry recovers. A possible parallel from elsewhere in the world is the slowdown effect the Saudi Arabian cement industry suffered in late 2013 when the government took action against illegal foreign workers in the construction industry.

The second news story to keep in mind is the annual results from refractory manufacturer RHI Magnesita this week. It reported growing revenue from its cement and lime customers in 2019 but it blamed a weaker market in Europe on producers stockpiling product due to tightening magnesite and dolomite raw material availability. The takeaway here is that if supply chains supporting the cement sector and the rest of the construction industry in India at the moment are affected by the coronavirus outbreak, and government action to stop it, then there may be consequences later on. So far Global Cement hasn’t seen anything like this but the preparation for coronavirus advice from industry expert John Kilne has been to indentify and secure medium term needs, including refractory and critical spare parts and to consider potential disruption to supply chains.

In terms of what happens next once the lockdown ends in India (and other countries), one media commentator has described the response to coronavrius as the ‘hammer and the dance.’ The hammer is the economy-busting measures many governments have implemented to stop local epidemics. The dance is/are the measures that countries are using before and after an outbreak to keep it suppressed until a vaccine is developed. The worry for building material producers is how much the ‘dance’ disrupts business over the next year. All eyes will be on the East Asian producer market figures for the first quarter to see how this plays out.