April 2020 data from the Japanese Cement Association (JCA) suggests that Japan has avoided the worst effects of the coronavirus outbreak. The industry’s total sales fell by 2.4% year-on-year to 16.4Mt in the first four months of 2020 from 16.8Mt in the same period in 2019. This is the kind of change associated with business as usual market trends, rather than the 20% declines seen elsewhere around the world in association to the coronavirus. In part this reflects the country’s case and mortality rate, which are far lower than other Group of Seven (G7) countries. The reasons for this may be due to lower levels of testing, less stringent lockdown measures and a more effective public health strategy. That last point is perhaps even more impressive given the population’s high median age (47.3). Whatever the reasons, the overall effect on the construction materials business seems low. 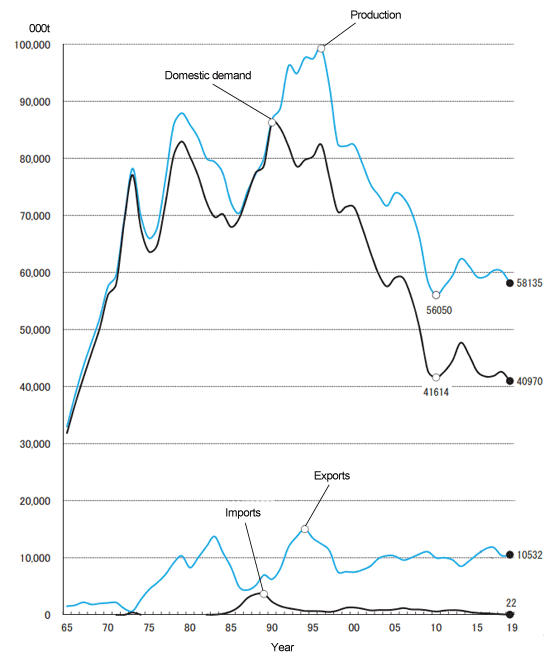 Graph 1 above shows the Japanese cement market in a historical context. Production peaked in the mid 1990s at a little below 100Mt/yr followed by a decline to above 40Mt/yr since 2010. This informs the current situation once one removes any effects from the health emergency. As Naoki Ono, the chairman of the JCA and the chief executive officer (CEO) of Mitsubishi Materials, described it in late May 2020, domestic demand for cement fell by 3.8% year-on-year to 41Mt in 2019. He blamed this on the completion of construction work for the 2020 Tokyo Olympic and Paralympic Games, the end of a period of rebuilding following natural disasters and a shortage of manpower.

All of this may explain why Taiheiyo Cement announced the acquisition of a 15% stake in state-owned Semen Indonesia subsidiary Solusi Bangun Indonesia in April 2020. At the time the producer said explicitly that the partnership with Semen Indonesia was part of Taiheiyo Cement’s response to a, “forecasted long-term decline in domestic cement demand in Japan.” Given the competiveness of the Indonesian market it seems like a brave move given the country’s overcapacity, the departure of LafargeHolcim and the arrival of China’s Anhui Conch. Meanwhile at home, Mitsubishi Materials and Ube Industries said in February 2020 that the companies were discussing a potential merger of their cement businesses. The letter of intent suggests a schedule of late September 2020 to sign a definitive agreement and a target of April 2022 to complete the integration. This follows the two companies working together since 1998 on a joint venture called Ube-Mitsubishi Cement, which integrated their cement sales and logistics operations. Mitsubishi Materials and Ube Industries are the third and fourth largest producers by production capacity in the country. A merger would potentially give the combined entity the same production base as the largest producer, Taiheiyo Cement.

Taiheiyo Cement’s experience in its 2020 financial year to 31 March 2020 was in line with Naoki Ono’s summary above, with both sales and profits down. Its domestic sales volumes decreased by 5% to 14.5Mt, although exports rose by 11% to 3.9Mt. In its financial report it highlighted its key foreign markets in the US, China, Vietnam and the Philippines. Despite increasing its sales in its 2020 financial year, Sumitomo Osaka Cement’s operating income and profits fell. It blamed this on energy costs, principally coal, and other raw material inputs. It has since published its next medium-term management plan. This includes a number of measures such as cutting costs and looking at overseas expansion. Both Mitsubishi Materials and Ube Industries reported similar reductions in their sales and profits. Mitsubishi Materials noted that it had observed a decrease in cement shipment due to the construction delay caused by the coronavirus.

Ratings company R&I is optimistic about the Japanese market following the start to 2020. In a recent news release it concluded that domestic cement demand is ‘solid’ for the next few years due to order backlog and anticipated infrastructure projects. In its assessment local producers have been improving their cost structures since 2010 in ways that should support ‘certain levels of profit’ provided domestic demand remains around 40Mt/yr. In the medium to longer term though it still expects domestic demand to decrease slowly. Hence, the overseas expansion, merger and acquisition activity and cost cutting plans of the larger producers. Long trends aside, the Japanese cement sector is coping well so far with the global health pandemic.