The race to zero

Cemex last week. HeidelbergCement and LafargeHolcim this week. China yesterday. One can’t seem to move for major building materials companies (or their owners) issuing carbon neutral strategies at the moment. This week HeidelbergCement first launched its ‘Beyond 2020’ plan, a mixture of financial, portfolio and sustainability goals. Then, LafargeHolcim said that it had signed a pledge with Science-Based Targets (SBT) towards meeting intermediate targets by 2030. Last night, President Xi Jinping told the United Nations (UN) General Assembly in New York that China was aiming to hit peak emissions before 2030 and carbon neutrality by 2060.

The timing of these various sustainability goals are directly or indirectly linked to Climate Week NYC, a notable annual event on the climate change calendar that is taking place at the moment. So it’s a good time for large-scale industrial CO2 emitters, like building material producers, to have something positive to say.

China’s announcement steals the limelight given that the country produces around half of the world’s cement and holds a higher share of clinker production capacity. Western media has pointed out the geopolitical implications of Xi’s statement that was delivered shortly after a speech by US president Donald Trump, a notable climate change sceptic. Xi’s speech didn’t contain any details so it may simply have been an attempt to demonstrate global leadership. Yet if the Chinese government makes a go of it, the effect could be profound. Data from the Centre for International Climate and Environmental Research (CICERO) shows that the Chinese cement industry emitted an estimated 782Mt CO2 in 2018 compared to 1.50Gt CO2 from the cement industry globally and 37.1Gt CO2 from all human-related sources. In other words, the Chinese cement industry was responsible for 2% of all CO2 emissions in 2018. And this industry is mostly owned by a government that has just publicly declared a carbon neutral target.

In some ways the other announcements, by the western-based multinational building material companies, are even more radical since these producers are subject to market forces. These companies don’t have to do this. They also contain more specifics than Xi’s words so far.

HeidelbergCement says it has brought forward its CO2 emissions target for 2030 of 525kg CO2/t (specific net CO2 emissions per tonne of cementitious material) to 2025. That’s a 30% decrease from 752kg CO2/t in 1990. Its new goal for 2030 is below 500kg CO2/t. The main emission reduction methods it outlines include: increased use of alternative raw materials and fuels; increased use of secondary cementitious materials to reduce the clinker factor of cement; investment in plant efficiency and CO2 reduction at the plant level; and increased share of low-carbon concrete products. 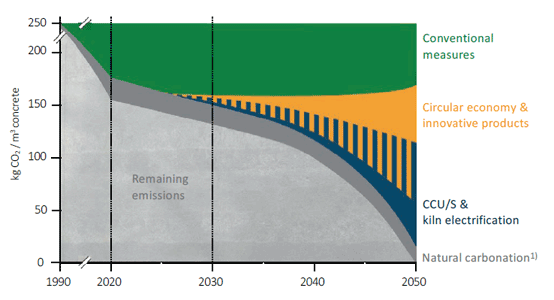 Chart 1 above outlines HeidelbergCement’s thinking post-2030 with further reductions to CO2 emissions mainly achieved through circular economy methods and different carbon capture techniques. Two points to hold in mind here. One: note the current uncertainty about which route will provide the biggest share of the reduction. Two: this chart considers concrete, not cement.

LafargeHolcim’s announcement was that it has joined Science Based Targets initiative (SBTi) ‘Business Ambition for 1.5°C.’ It says that by doing so it has become the first global building materials company to sign the pledge with intermediate targets for 2030, validated by SBTi. This is slightly confusing given that other building materials companies have had different dealings with the SBT as it has worked towards its current scheme. Earlier this month, for example, we reported that Taiwan Cement had started an SBT project in 2019 and had some targets approved by the SBTi in June 2020. Grupo Cementos de Chihuahua (GCC) said it was joining SBTi at the start of 2020 and HeidelbergCement reported its SBTi approved targets in mid-2019. Finally, India-based Dalmia Cement is also on the SBTi ‘Business Ambition for 1.5°C’ list but it is a stretch to describe it as a ‘global’ company.

The core of LafargeHolcim’s statement is a further reduced target for CO2 intensity in cement of 475kg CO2/t by 2030. So far it’s decreased its CO2 intensity by around 23% to 516 kg CO2/t in 2019 from ~730kg CO2/t in 1990. There’s less looking ahead after 2030 compared to HeidelbergCement but the measures outlined until then include: more use of low-carbon and carbon-neutral products; increased use of alternative raw materials and fuels; doubling waste-derived fuels in production to reach 37%; greater use of calcined clay and developing novel cements with new binders; and operating the company’s first net zero CO2 cement production facility.

Many of the various networks and initiatives across the climate action community came together in June 2020 as part of the UN backed ‘Race To Zero Campaign,’ an attempt to align the disparate leading net zero initiatives ahead of the 26th United Nations Climate Change Conference (COP), due to take place in November 2021 in Glasgow, Scotland. This swirl of different net zero schemes also partly explains the confusion over the different organisations backing sustainability targets that companies can sign up to. So it’s a good thing to see closer collaboration here.

More cynical readers will have latched on to president Xi’s opportunity to show up President Trump in the climate change action stakes. They may also prefer news stories about activist investors prompting change at shareholder-owned companies as they increase their portfolios or stories like Morgan Stanley’s announcement this week that it has a new commitment to reach net-zero financed emissions by 2050. If the investment bank actually means it and other financiers follow suit then the fiscal incentives for net zero draw closer and the rest should follow. Moneys talks… and hopefully CO2 stays buried in the ground.

Last modified on 23 September 2020
Published in Analysis
Tagged under