Emissions trading in Europe and China

The European Union (EU) Emissions Trading Scheme (ETS) looked like it might be about to hit Euro40/t this week. It still might. You can blame it on the current cold front bringing snow to much of Northern Europe and the bedding into of the fourth phase of the ETS that started in January 2021. In early 2020 analysts were generally predicting an average price of around Euro30/t by 2030 bolstered by volatility in the price due to the start of the coronavirus pandemic. Yet the price recovered and so did the European Commission’s resolve to push through its European Green Deal. By mid-December 2020 the price had shot past Euro30/t and analysts were forecasting average prices of well over Euro50/t by 2030. Depending on one’s disposition this is the rate at which either serious decarbonisation attempts will begin to be viable for commercial companies, or the point at which more plants simply close.

One group which is well aware of the EU ETS and its consequences upon the cement industry is Cembureau, the European cement association. Some of its current lobbying efforts have been directed at trying to shape how the Carbon Border Adjustment Mechanisms (CBAM) will appear in legislation proposals in June 2021. Its argument boils down to protecting its members from carbon leakage both in and out of the EU’s borders and maintaining free allocation until 2030 to ease the transition to a lower carbon economy. The former should find common ground. However, calls for a CO2 charge exemption for EU exporters may perplex environmentalists, who might wonder how this could possibly encourage third party countries to introduce their own carbon pricing schemes. The latter is clearly pragmatism for an industry saying that it is facing change at a pace that may be too rapid for it to cope with. Concrete products do carry sustainability advantages over other building materials. Wiping out swathes of the region’s production base, simply because one knows exactly how much CO2 they emit compared to rival building materials that one doesn’t, may not help the EU reach its climate commitments by 2050. As if to underline this fear, another European clinker line was earmarked for closure this week when Lafarge France announced the planned conversion of the Contes cement plant into a terminal. 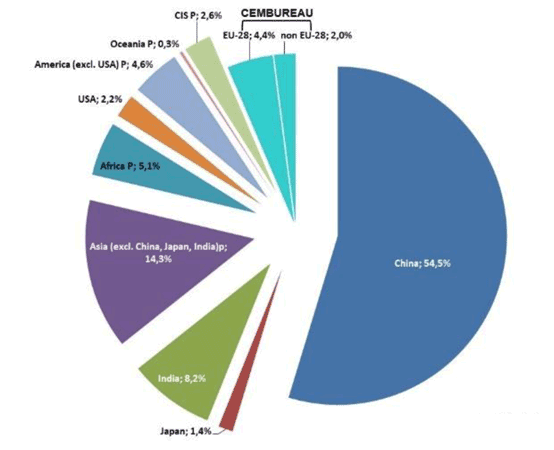 Figure 2 above puts the situation into a global perspective, showing that Cembureau’s members were responsible for below 7% of cement production in 2018. China produced an estimated 55% of global cement production in the same year. In terms of overall CO2 emissions across all sources, the International Energy Agency (IEA) estimated that China produced 30% of CO2 emissions in 2018.

It seems odd then that the introduction of an interim ETS in China at the start of February 2021 didn’t receive more global news coverage. The new scheme covers 2225 power companies across the country. It follows pilot regional schemes that have run since 2011, covering seven provinces and cities including Beijing, Shanghai and Guangdong. Previously, the country’s largest local carbon market, the China Emissions Exchange (Guangzhou), was based in Guangdong province and it included power generation, cement, steel, and petrochemical sectors. State news agency Xinhua reports that this scheme reduced carbon emissions from these industries by 12% from 2013 to 2019. The new national ETS is expected to include cement and other industries at a later stage.

Commentators in the European press have pointed out that the Chinese national ETS is actually planning to make an effort on transparency and to force companies to publish their pollution data publicly. Yet, they’ve also said that the data may be inaccurate anyway, echoing the usual Western fears about Chinese figures. Other concerns include the method of giving out pollution permits rather than allocating them by auction as in other cap and trade systems, which could reduce the incentive to reduce emissions. It’s also worth pointing out that carbon was priced at US$6/t under the Chinese system compared to around US$35/t in the EU and US$17/t in California, US at the end of 2020. At this price it seems unlikely that the Chinese national ETS will encourage much change without other measures.

The EU and Chinese ETS are at different stages but the differences in scale are stark. When or if the Chinese one goes national across those eight core industries it will likely leapfrog over the EU ETS and become the world’s largest with an estimated 13,235MtCO2e under its purview. By contrast, the EU ETS manages 1816MtC02e according to World Bank data. The kind of dilemmas Cembureau and others are tackling with the EU ETS such as carbon leakage and how fast to tighten the system against heavy emitters are illustrative to other schemes in China and elsewhere.

Last modified on 10 February 2021
Published in Analysis
Tagged under