Another week and it’s another commodity story related to the effects of coronavirus. This time the Indian press and financial analysts have started to notice a shift in the fuel mix of some of the major producers from petcoke to coal. UltraTech Cement moved to 30% petcoke and 60% imported coal in the fourth quarter of its 2021 financial year that ended on 31 March 2021. This compares to a reported mix of 77% and 10% in the previous year according to Mint. Dalmia Bharat reduced its share of petcoke to 52% in the fourth quarter from 70% in the third quarter, while its coal mix was 35 - 40% in the fourth quarter.

Price is the driver here. UltraTech Cement’s chief financial officer Atul Daga summed the situation up in an earnings call in late January 2021. Essentially, he said that fuel represented about 13% of total costs for cement producers in India and that both the cost of coal and petcoke nearly doubled from June 2020 to January 2021. However, coal is seen as the cheaper option, hence the move towards it in the fuels mix ratio. The petcoke market meanwhile has suffered due to reduced oil refinery output due to, you guessed it, the effect of coronavirus on global markets in 2020. Scarcity in the US market has particularly affected the decisions on buyers for Indian cement companies since this is the key source of their imports. Demand for petcoke from Latin America and the Mediterranean hasn’t helped either. Both petcoke and coal markets are expected to stabilise in the second half of 2021. Diesel prices have also risen recently causing UltraTech Cement’s power and fuel costs to increase by 28% year-on-year to US$356m and logistics costs, including freight expenses, to rise by 25% to US$449m in the fourth quarter of its 2021 financial year.

With this in mind it’s interesting then, that for some analysts at least, fuel prices have been seen as more worrying for cement producer profits than the latest round of coronavirus-related lockdowns from India’s second wave of infection. Fitch Ratings for example, warned that the impact of mounting fuel costs would continue to be seen in the quarter to June 2021 but that it would subside due to the switch in fuel mix and price rises passed to end consumers. On the lockdowns, it forecast that localised restrictions, with cement plants being allowed to continue operating in most states, would cause a far less pronounced drop in cement demand than during the first national lockdown. 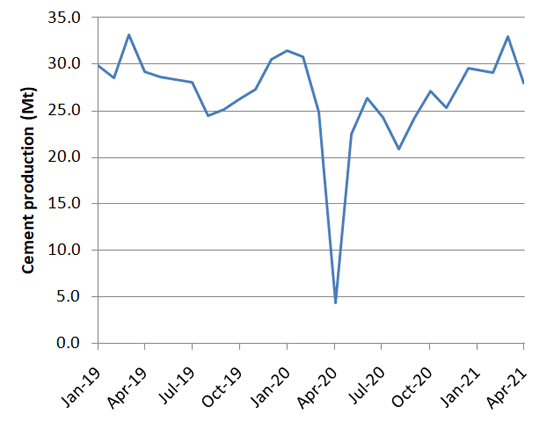 Graph 1 above shows that the crisis the Indian cement sector faced during the first lockdown, when production crumbled by 85% year-on-year to 4.3Mt in April 2020. The following recovery saw production reach its second highest ever figure at 32.9Mt in March 2021. It’s too soon to tell what’s happening from the national figure but that dip in April 2021 is not looking good so far.

One benefit from unstable fuel prices is that it builds the economic case for cement producers to raise their alternative fuels substitution rates. UltraTech Cement, for example, reported that its ‘green’ energy rate grew to 13% in its 2021 financial year from 11% in 2020. With a target of 34% by its 2024 financial year, this is an ideal opportunity for a change for both UltraTech Cement and other producers.