The Great Wall of Donald Trump

Back in the May 2016 issue of Global Cement Magazine we asked key people at the Portland Cement Association how they thought the US presidential election might affect the local cement industry. Wisely, for an advocacy organisation with offices in Washington DC, no one would be drawn, citing a lack of information. At that point it was still unclear who was going to be on the final ticket. However, we all missed a trick because one candidate, Donald Trump, had been talking about building ‘a border fence like you have never seen before’ since at least mid-2014. And that fence could potentially require a lot of cement.

Researchers at market analysts Bernstein’s sent a note to clients last week ahead of the Republican National Convention looking at the implications of if Donald Trump became president of the US and actually set out to build his 40ft high concrete wall between the US and Mexico. The result would be a 2.4Mt boost in demand for cement from cement producers near to the border. In terms of market demand Bernstein concluded that this would add over 1% to cement demand in both 2018 and 2019, a healthy ‘shot in the arm’ to the already pepped-up US cement industry, which is currently growing at around 5%/yr. 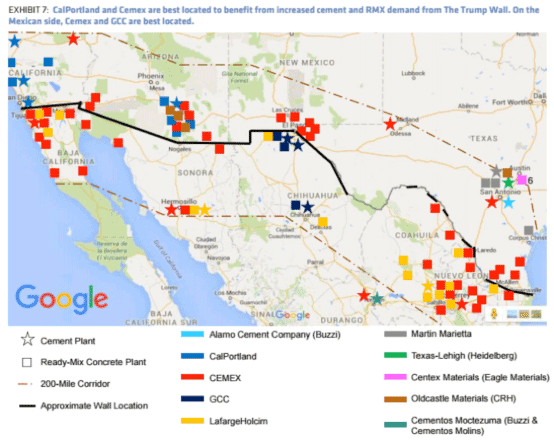 Map 1: Map of cement and ready-mix concrete plants near to the US - Mexico border. Source: Bernstein Materials Blast. Note – Bernstein does not show the Capitol Cement plant in San Antonio.

Needless to say, Bernstein’s calculations pile-drive assumptions into assumptions, atop of Trump’s political rhetoric. It bases its calculations on a border wall similar to the Israeli West Bank barrier built out of precast concrete panels. It also tries to model how much concrete and cement would be required depending on the differing height’s Trump has trumpeted at his rallies.

The kicker to this tongue-in-cheek analysis is that the construction company that stands to benefit the most from this infrastructure project is Mexican!

Cemex has significantly more cement plants and ready-mix concrete plants than any other company within a 200-mile zone either side of the border. Looking at integrated cement plants alone, it has six plants in the regions near to the proposed wall from the east and west coasts. Its nearest competitors, CalPortland with four plants and Grupo Cementos de Chihuahua with three plants, are more regionally based in the western US and Chihuahua state in Mexico. Clearly Cemex didn’t rate the chances of Donald Trump’s wall actually happening when it agreed to sell its Odessa cement plant to Grupo Cementos de Chihuahua in May 2016.

All of this goes to show that, wherever you stand on the Donald Trump presidency bid, if you manufacture cement near the US-Mexican border you might be working overtime if he (a) actually becomes president, (b) actually manages to start building his wall and (c) actually decides to make it using cement. Yet before anybody starts popping champagne corks consider this: there might also be unintended consequences for the cement sector. Restricting current legal and illegal migration trends from Mexico to the US might have a greater negative effect on the US cement industry, and the overall economy, than ordering one large infrastructure project. Working that one out is harder than a guesstimate of how much cement a border wall might consume. Probably best not to ask at this stage who might actually pay for the Great Wall of Donald Trump.