Two of Japan's largest cement producers have reported reduced domestic cement sales in the country this week. First, Taiheiyo Cement revised its forecast for its 2017 financial year, ending on 31 March 2017, bringing its estimated net sales down by 2.3%. Then, Ube Group reported that its cement sales had fallen by 7.2% year-on-year to US$1.05bn in the first half of its financial year. Both producers blamed poor weak demand locally, but Ube also cited a poor export market. 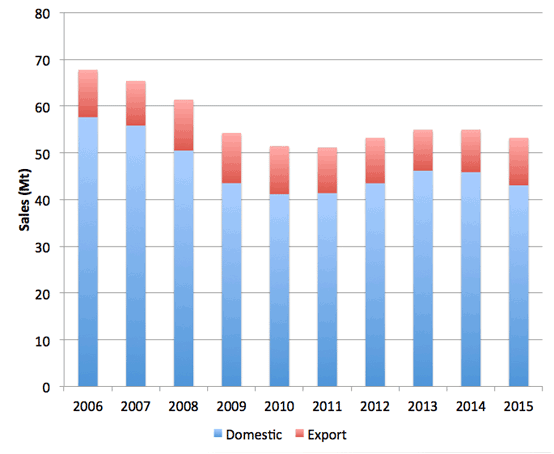 This last point is interesting because it differs from the latest data released by the Japanese Cement Association (JCA). As can be seen in Graph 1 JCA figures show that exports of cement have been rising since 2013. So far this trend looks likely to continue in 2016. Ube's different experience may arise from its market mix and its distribution of cement plants and transport infrastructure. Both of its cement plants are based in the south of the country. Commentators have attributed the boost in exports to the devaluation of the Yen in 2015 as well as strong brand perception overseas. Unfortunately, this overall rise in exports has been matched by a fall in domestic sales at the same time and this is causing a headache for the major producers. Production too has started to drop since 2014 (Graph 2). 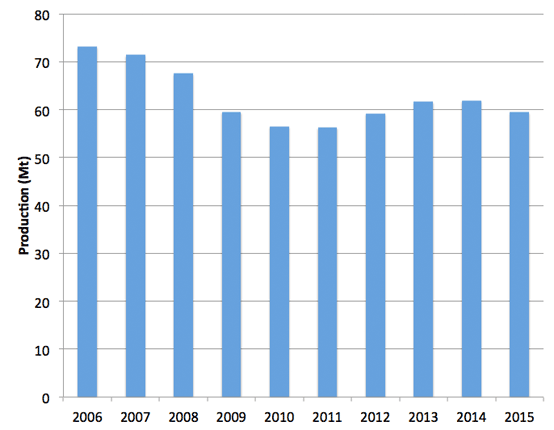 Japan's cement market is dominated by four producers - Taiheiyo Group, Mitsubishi Materials, Ube Industries and Sumitomo Osaka Cement - which hold nearly three quarters of the nation's production capacity between them. According to Global Cement Directory 2016 data, Taiheiyo Cement and its subsidiaries is the market leader with over 30% market share with the other three holding 10 - 20% each. 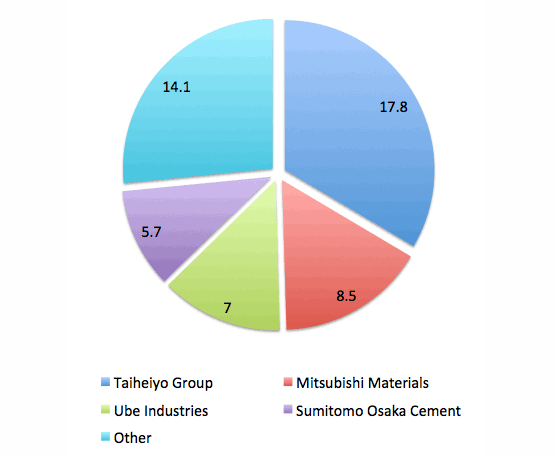 Taiheiyo's downgraded forecast follows poor first quarter results, in which its net sales for its cement business fell by 16% to US$1.19bn. This follows a slight rise in net sales for its cement business in its 2016 financial year due to a boost in sales from its overseas subsidiaries, particularly in the US, that surpass a fall in domestic sales. Sales volumes were 14.7Mt domestically and 4Mt in exports in 2016. Mitsubishi Materials has posted a similar picture with cement sales and profits rising in 2016 before suffering in the first quarter of 2017. Mitsubishi Materials blamed the poor market on a delay in construction work mainly due to labour shortages and sluggish growth in demand from the public sector. Ditto Sumitomo Osaka Cement.

As highlighted by such decision as Tokyo Cement's move to resume exporting clinker to Sri Lanka in early 2015, Japan's cement industry is working hard to compensate for falling demand at home. Increasing exports in Asia Pacific among other massive exporters such as China, Vietnam and South Korea is impressive, although the prominent foothold by Japanese companies in the recovering US market may offer some advantage here. On-going weak demand in China though cuts out one major market for Chinese exporters. However, being a major exporter in a region of major cement producers must be a concern. Although commentators such as Ad Ligthart dismiss the chances of China flooding the world with cheap cement, if they are wrong and Japan continues its reliance on exports it may find itself in deep water. The other risk is if the US authorities decide to get tougher on foreign exports it may knock out one more market for Japanese exports. Too much reliance on exports is always dangerous. In this context, it’s no surprise that Japanese cement producers are blaming the government for insufficient infrastructure spending.

Last modified on 02 November 2016
Published in Analysis
Tagged under