Morocco’s Directorate of Financial Studies and Forecasting has reported that cement sales rose by 8.4% year-on-year in October 2016. It's good news for a local cement industry that saw its sales fall from 16.1Mt in 2011 to a low of 14.1Mt in 2014. Sales picked up slightly in 2015 and it looks like the same is going to happen again in 2016. Data from the Moroccan Cement Association (APC) support this with consumption of cement very slightly higher for the first nine month for 2016. Good sales figures in October can only help. 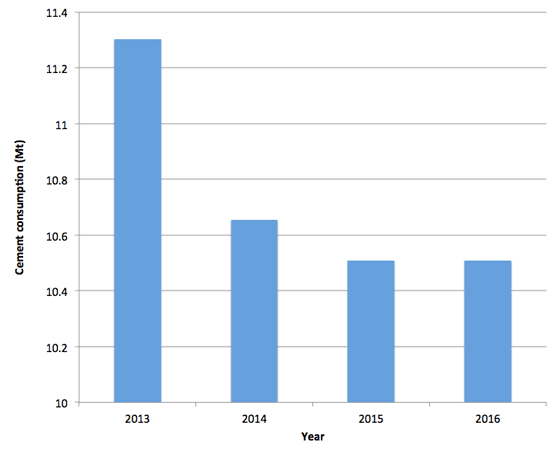 2016 has also been an interesting time for the Moroccan cement industry due to consequences of the merger and acquisition activity by the multinational producers that operate there. In March 2016, amidst a slew of divestments, LafargeHolcim made a point of announcing that it was holding on to its cement businesses under Lafarge Maroc and Holcim Maroc and enlarging them with its local partner SNI to form LaafrgeHolcim Maroc. The deconsolidation of Holcim Maroc picked up a net gain before taxes of Euro219m for a total consideration of Euro463m, which should considerably add to the group’s cash proceeds.

It managed to avoid being forced to sell off assets by the local competition body when it merged in 2014 due to its relatively low stakes in its companies. Today it has a production capacity of 13.2Mt/yr from seven integrated cement plants or over half the country’s production capacity. In its annual report for 2015 LafargeHolcim said that its cement business saw its results improve, mitigating problems in its aggregate and ready-mix concrete markets. This was followed by good results in the first half of 2016. New projects in the pipeline include plans to build a cement plant in Agadir and a grinding plant in Laâyoune in Western Sahara.

2016 has also seen the acquisition of Morocco’s second largest cement producer, Ciments du Maroc, by HeidelbergCement as part of its purchase of Italcementi. It’s too soon for HeidelbergCement to have reported upon the territory in its first integrated quarterly financial report following the takeover but it did describe Morocco as a having a ‘high growth potential.’ How these assets fit into the wide portfolio of HeidelbergCement’s new production base will be interesting. Ciments de l’Atlas’ (CIMAT), the country’s third largest and local producer, saw its sales fall slightly to Euro124m in the first half of 2016. However, its net profit rose by 13% year-on-year to Euro30m.

The other story of note in recent months in Morocco has been the public outcry against a shipment of refuse-derived fuel (RDF) from Italy in June 2016 destined for a cement plant in Casablanca. The subsequent protests saw waste imports to be suspended, leading Hakima al-Haiti, the government minister at the heart of the affair, to describe the furore as causing damage to the country’s economy in the aftermath. However her opponents rallied under the phrase “Nous ne sommes pas une poubelle” or ‘We are not a trash can.’ Despite this setback for the secondary fuels market, LafargeHolcim highlighted the work its Ecoval waste processing subsidiary has been conducting producing RDF at its Oum Azza site ahead of the Climate Change Conference of the Parties held in Marrakech in mid-November 2016. Although the key difference here is that Ecoval is generating RDF from local waste streams not importing them.

Perhaps as a sign of the growth potential Morocco may hold, this week, a non-cement producer was revealed to be planning to build a cement plant at Tarfaya. Previously the company, Global Oil Shale, had intended to develop shale oil resources at the site but it has switched its plan to constructing a 1.6Mt/yr cement plant instead and hired Luis Verde, a former technical director at Cemex who has also worked for Dangote. Together with the Lafarge project in Laâyoune and the Ciement Sud (CIMSUD) plant also in Western Sahara due to open in mid-2017 it suggest that the investors smell opportunity.

Last modified on 30 November 2016
Published in Analysis
Tagged under