As readers in colder climes will understand: nobody likes a gas bill. Save some pity for LafargeHolcim Bangladesh then this week, as it faces attempts to hike the price it’s paying.

As reported by local press the government-run Jalalabad Gas Transmission and Distribution Systems (JGTDS) is trying to raise the rate for natural gas to the cement producer. Allegedly, LafargeHolcim Bangladesh is paying a lower unit cost for gas supplied to a power plant at its Chhatak cement plant than the fixed amount set by the country’s energy regulator. LafargeHolcim Bangladesh says the rate was set in a gas sales agreement (GSA) signed between JGTDS and its predecessor, Lafarge Surma Cement, in January 2003. The state body meanwhile has referred the issue up the chain of command to the Energy and Mineral Resources Division under the Ministry of Power, Energy and Mineral Resources.

JGTDS says that the plant is consuming around 450,000m3/day of gas. Of this, about a quarter is used to run the power plant and the remainder is used to power the cement plant’s kiln. The plot thickens though as LafargeHolcim Bangladesh is actually paying above the industry tariff for gas of US$0.09/m3. Commentators reckon the price of gas is set to rise in the future. Naturally the cement producer wants to stick to the pre-agreed price for the economic viability of the country’s main integrated cement plant. The Spanish embassy, representing Cementos Molins one of the owners of the company along with LafargeHolcim, has even gone as far as intervening in the argument.

The pressure is on LafargeHolcim Bangladesh because its sales revenue fell slightly year-on-year in 2016 but its fuel costs rose by 12%. As the country’s sole clinker producer it suffered from falling international clinker prices in a nation full of grinding plants. So far in the first nine months of 2017 its sales revenues have risen a little yet its profit has more than halved. Any change to its fuel costs would seem likely to damage the company at a delicate moment. 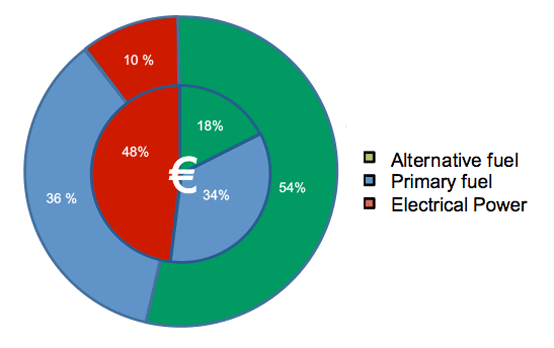 Energy costs for cement plants are nothing trivial as the graph above shows. It uses data from the German cement industry but the key takeaways are that the calorific ratios of the different types of energy cement production uses don’t directly correlate to the cost. Hence, in Bangladesh and other countries where the electricity grid might be unreliable or expensives, running one’s own captive power plant makes sense both for cost and supply reasons. As an aside that may not be applicable to Bangladesh right now, the stark disparity between the energy produced by alternative fuels and their cost proportion is a great reason to use them if the necessary supply chains can be organised. LafargeHolcim launched local operations for its waste management wing Geocycle in December 2017 so this point has not been lost the company.

The situation in Bangladesh is reminiscent of the bind Dangote Cement found itself in towards the end of 2016 in Tanzania. A dispute over gas prices for its Mtwara plant led to company boss Aliko Dangote negotiating personally with President John Magufuli to protect his investment. Governments want inward spending in the form of new industrial plants and multinationals want assurances on some of their costs, like fuel supplies, before they reach for the chequebook. However, if one side is seen to be getting too good a deal then the relationship can break down. LafargeHolcim Bangladesh may have bagged itself a scandalously low gas deal and the Bangladesh government may also be breaking an agreement. Bear in mind though, that with sales of nearly US$28bn in 2016, LafargeHolcim took in revenue nearly one tenth of Bangladesh’s gross domestic product. If the two parties don’t reach an accord, the consequences for both parties could be negative.