Many of the Chinese cement producers have released their annual results for 2017 over the last week, giving us plenty to consider. The first takeaway is the stabilisation of cement sales since 2014. As can be seen in Graph 1, National Bureau of Statistics data shows that cement sales grew year-on-year from 2008 to 2014. This trend stopped in 2015 and then government mandated measures to control production overcapacity kicked-in such as a industry consolidation, shutting ‘obsolete’ plants and seasonal closures. Although it’s not shown here, that last measure, also known as peak shifting, cans be seen in quarterly sales data, with an 8% year-on-year fall in cement sales to 578Mt in the fourth quarter of 2017. 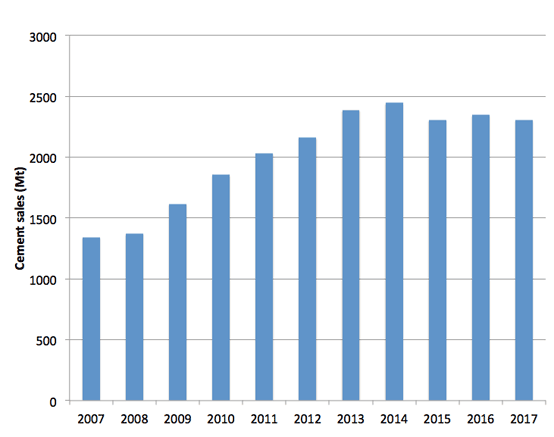 Looking at the sales revenue from the larger producers in 2017 doesn’t show a great deal except for the massive lead the two largest producers – CNBM and Anhui Conch – hold over their rivals. CNBM reported sales roughly twice as large as Anhui Conch, which in turn reported sales twice as large as China Resources Cement (CRC). With everything set for the merger between CNBM and Sinoma to complete at some point in the second quarter of 2018, that leader’s advantage can only get bigger. 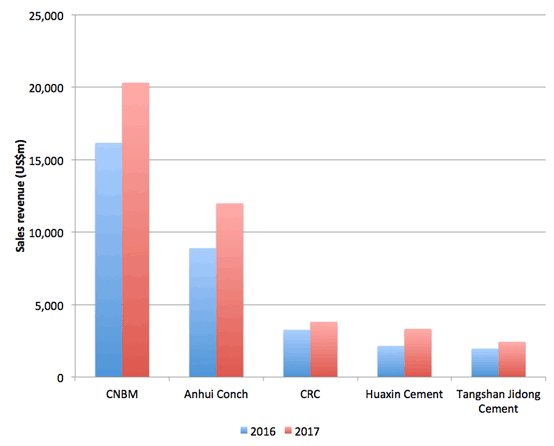 What’s more interesting here is how all of these companies are growing their sales at over 15% in a market where cement sales volumes appear to have fallen by 1.67% to 2.31Bnt in 2017. CNBM explained that its sale growth arose from improving cement prices in the wake of the government’s supply side changes. It added that national cement production fell by 3.1% to 2.34Bnt. CNBM’s annual results also suggested that the cement production capacity utilisation rate was 63% in 2017.

Anhui Conch’s results were notable for its large number of overseas projects as it followed the state’s ‘One Belt, One Road’ overseas industrial expansion strategy. Projects in Indonesia and Cambodia were finished in 2017 with production set for 2018. Further plants are in various states of development in Laos, Russia and Myanmar. The other point of interest was that Anhui Conch is developing a 50,000t CO2 capture and purification pilot project at its Baimashan cement plant. Given the way the Chinese government has been able to direct the local industry, should it decide to promote CO2 capture at cement plants in the way it has pushed for waste heat recovery units or co-processing, then the results could be enormous.

As ever with the Chinese cement industry, the worry is what happens once the production overcapacity kicks in. The state–published figures and state-owned cement companies suggest that the industry is in the early stages of coping with this. In February 2018 Reuters reported that the Ministry of Industry and Information Technology (MIIT) had banned new cement production capacity in 2018. The detail here is that new capacity is allowed but that it has to follow specific rules designed to decrease capacity overall. This followed an announcement by the China Cement Association that it would eliminate 393Mt of capacity and shut down 540 cement grinding companies by 2020. The aim here is to hold capacity utilisation rates at 80% and 70% for clinker and cement respectively and to consolidate clinker and cement production within the top ten producers by 70% and 60%. If the utilisation rate from CNBM is accurate then the industry has a way to go yet.

Last modified on 28 March 2018
Published in Analysis
Tagged under