Is Brazil’s cement industry ready to bounce back?

Print this page
Written by David Perilli, Global Cement 16 May 2018

Votorantim shone a glimmer of hope for the Brazilian cement industry with the release of its first quarter financial results this week. Increased sales volumes in Brazil, Turkey, India and Latin America led to an 11% rise in revenue to US$682m in the period. Admittedly back home in Brazil, most of this came from concrete and mortar sales, but after the slump Brazil’s had they’ll take whatever they can get. This compares to a 14% drop in sales revenue in the same period in 2017 due to falling cement consumption. 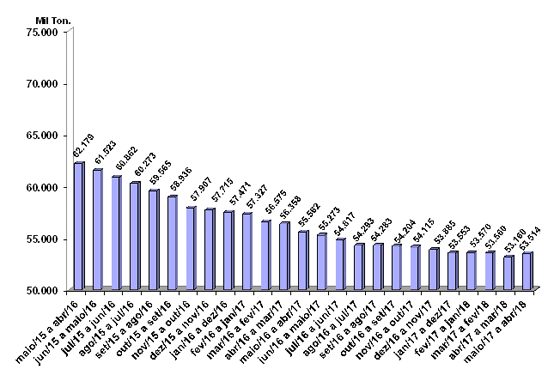 SNIC, Brazil's national cement industry association, preliminary figures for April 2018 show a similar trend. Cement sales for April 2018 rose by 8.9% year-on-year to 4.35Mt from 4Mt. Sales for the first four months of the year dipped slightly by 0.2% to 16.9Mt although this is an improvement on the first quarter figures showing the benefit a strong April has had. Improvements are driven by growth in the central and southern parts of the country. SNIC’s graph of accumulated sales (Graph 1) definitely shows a slowing trend of decreasing cement sales with April 2018 being the only the second month in over two years where sales have risen.

Paulo Camillo Penna, the president of SNIC, even went as far as to speculate that the three months from April to June 2018 might see the first sustained period of improvement since 2015 and that sales could even grow by 1% for the year as a whole. This is a far cry from Penna’s description of his industry at the start of 2017 as, “One of the worst moments in its history.”

Votorantim reported that some regions of Brazil were starting to show a positive trend in the second half of 2017. Unfortunately it wasn’t enough to stop the cement producer’s overall sales falling for the year. LafargeHolcim didn’t release specific figures for its Brazilian operations in 2017 but it did say that its cost savings programme had, ‘provided for material improvement versus prior year both in recurring earnings before interest, taxation, depreciation and amortisation (EBITDA) and cash flow.’ It reckoned that despite the market contracting, it had managed to increase its market share. Meanwhile, on the supplier side RHI Magnesita said in a first quarter trading update that its cement and lime business was flat due to continuing low capacity utilisation rates in China and Brazil.

If this truly is the end of the Brazilian cement market slump then it seems surprising that there haven’t been more mergers or acquisitions. Mineração Belocal, a subsidiary of Belgium’s Lhoist, said this week that it had purchased L-Imerys, a lime producer that operates a plant at Doresópolis in Minas Gerais. Local refractory producer Magnesita merged with RHI in mid-2017.

The big deal that hasn’t happened is the sale of InterCement, the country’s second largest cement producer. Owner Camargo Corrêa was reportedly selling minority stakes in the company in 2015. Then in early 2017 local press said that it was aiming for a price of US$6.5bn for the whole company with Mexico’s Cemex as a potential bidder. Since then nothing has happened publicly although the initial public offering of InterCement’s Argentine subsidiary Loma Negra in November 2017 for US$954m may have bought Camargo Corrêa the time it needed to wait for the market to improve. Rumours of a public listing of InterCement’s European and African operations have followed.

In its World Economic Outlook in April 2018 the IMF forecast a 2.8% rise in gross domestic product (GDP) in Brazil in 2018. If SNIC’s forecast for 2018 is correct then Camargo Corrêa may have survived the worst of the slump to live to trade another day. The price for InterCement at this point can only rise, as should the prospects of the Brazilian industry.

Last modified on 16 May 2018
Published in Analysis
Tagged under