Taking the industry pulse at Hillhead 2018

Hillhead 2018 is on this week and where better to capture a feel of the UK’s quarrying and construction industries? For those that don’t know, Hillhead is a biennial show that takes place in a quarry in Derbyshire. The show bills itself as the largest quarrying, construction and recycling event in the world. A large scale UK show gives us the opportunity to look at the local cement industry and we did exactly that in the June 2018 issue of Global Cement Magazine with Edwin Trout’s feature on the UK cement sector in 2017 and 2018. Following on from that article we’ll pick up a few threads. 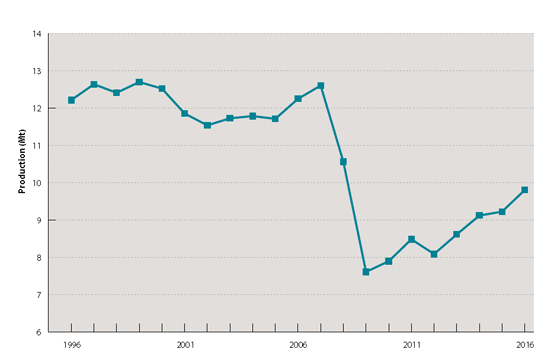 Cement production in the UK fell by 5Mt/yr during the financial crisis of 2007 - 2008. Since then, as Graph 1 shows, production has been growing almost uniformly. However, it may have reached a plateau in 2017, with the major producers complaining about a weakened market due to Brexit uncertainty.

Main points from a news angle are the rise of the Breedon Group with its acquisition of Ireland’s Lagan Cement in April 2018, investments at Hanson’s Padeswood cement plant and Tarmac’s Dunbar cement plant and a fairly static market reported by the major producers. Alongside this, Ireland’s Ecocem opened a terminal in Sheerness in June 2017 and, more recently, has just inaugurated its slag grinding plant on the other side of the English Channel at Dunkirk.

The decision by Breedon to straddle an impending UK-European Union (EU) border seems wise with Hanson’s parent company HeidelbergCement actively blaming Brexit for market uncertainty in the UK. The rise of Ecocem, a slag cement grinder and distributor, also seems to suit the atmosphere with its smaller, more nimble operation than a clinker producer. It’s into this situation that Hanson is reusing a mill from Spain for its Padeswood project and Tarmac is buying its mill from Cemengal, a manufacturer known for making modular mills that can be moved after installation if so desired.

Banging on about Brexit, and indeed Brexit uncertainty, can’t last forever and once clarity appears then the building industry can focus on various pressing issues. One is the country’s lack of residential housing supply. One possible solution for this is a new national planning policy. The government finished a consultation period in May 2018 for the National Planning Policy Framework (NPPF) and industry bodies like the Mineral Products Association (MPA) have been making their views known. The MPA worries that that the proposed changes will weaken the mineral planning system and threaten the replenishment of aggregate and other mineral reserves. It argues that to secure the essential minerals required to build all those new houses the government needs an, “...efficient and effective mineral planning system with up to date plans, well-resourced planning departments and good data, which are prerequisites, as is appropriate capacity and capability in the ministry to ensure the system is planned, monitored and managed.” Detractors may point out that once the NPPF gets sorted we can all get on with the job of actually, like, building things but, as ever, the MPA has its part to play in the process.

Another indicator for the resumption of ‘business as normal’ might be the number of exhibitors at a trade show like Hillhead. The oranisers say that the exhibitors have grown by 10% in 2018 from 2016. With a heatwave forecast, the group stages of the football World Cup continuing and live demonstrations ongoing there are worse places to be to ponder the state of the industry. Come and find Global Cement at our stand (PC45) in the main pavillion at Hillhead 2018 and tell us what you think.

Last modified on 26 June 2018
Published in Analysis
Tagged under