Cementos Fortaleza started building its new grinding plant in Merida this week. The 0.25Mt/yr unit is expected to open in July 2019. It marks the first new plant in the country in a while and it will be only the second in the south-eastern state of Yucatan, joining Cemex’s integrated plant. It follows a number of upgrades at existing plants over the last two years, such as various mill orders by Cruz Azul from European suppliers (as part of an upgrade at two of its plants) and Elementia’s upgrade to its Tula plant.

Note that Cementos Fortaleza is a subsidiary of Elementia, the building materials company partly-owned by ‘Mexico’s richest man’ Carlos Slim. The group has steadily been expanding with its purchase of the remaining share in Cementos Fortaleza in 2015, acquiring a controlling stake in Giant Cement in the US in 2016 and a project to build a grinding plant in Costa Rica in early 2018.

The other big news story this week with implications for the cement sector was the arrangement of the US-Mexico-Canada Agreement (USMCA), the successor to the North American Free Trade Agreement (NAFTA). Although the exact details of the deal are still emerging, the consensus is that the cement industry in Mexico is unlikely to be affected much. The two points that might have implications for the cement industry are changes to rules of origin regulations and tariffs on imports made by low-wage workers. Both clauses are targeted at the automotive sector to protect US industry so it is unlikely that cement will be affected. In addition it is worth remembering that Mexico was the fifth largest exporter of cement and clinker to the US in 2017 after Canada, Greece, China and Turkey. And, all the major Mexican cement producers operate plants in the US, further protecting them from any potential negative consequences of the USMCA. 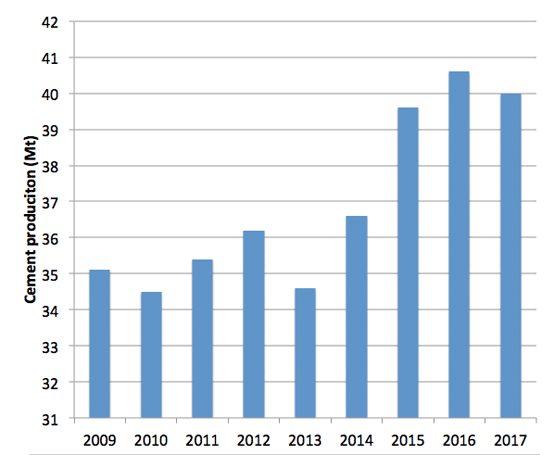 Back in Mexico, the graph above shows that production has been growing in fits and starts over the last decade. The last growth trend started in 2013 but it stalled in 2017. However, the Camara Nacional del Cemento (CANCEM) was forecasting growth of 2.5% year-on-year for 2018 in April 2018. The last time this column covered Mexico, back in early 2017, we produced a breakdown of the industry by company and production capacity. This is worth looking at for an overview of the production base.

Cemex, the largest local producer, reported Ordinary Portland Cement sales volume growth of 3% year-on-year in the second quarter of 2018 but flat growth for the first half of the year. This growth was supported by good activity in the formal residential sector with support from the industrial and commercial sector. LafargeHolcim released less detailed figures for the first half of 2018 but it attributed its strong performance in Latin America to Mexico. Overall cement sales for the region grew by 12.1% to 12.6Mt, in part due to large infrastructure projects in Mexico, such as the new Mexico City International airport. The third biggest producer, Grupo Cementos de Chihuahua, said that its cement sales volumes rose by 2.5% in the first half of the year, supported by rising prices.

As reported in early 2017, the Mexican cement industry is moving ahead with confidence. A modest amount of production capacity is being built, the steady market growth since 2013 looks set to continue after a minor blip in 2017 and the main producers are all reporting good performance so far in 2018. Finally, the USMCA looks unlikely to trouble Mexican producers much and their diversified holdings will certainly help them if it does. For the moment - bravo!