HeidelbergCement is set to release its third quarter financial results later this week. In the meantime what can the results from the other major cement producers tell us? 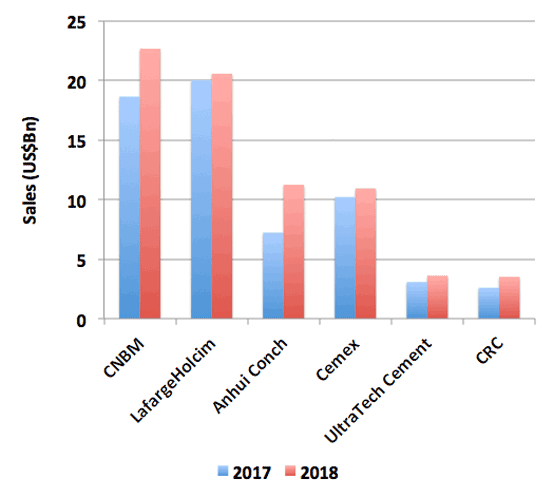 The biggest of the big beasts, China National Building Material (CNBM), released its third quarter update last week. As usual for a major Chinese producer it was the expected story of continuing double-digit growth. Operating income up, profit up and little other information besides.

CNBM’s half-year report back in August 2018 had more information, revealing that cement production volume fell by 5% year-on-year to 143Mt in the first half of 2018 from 150Mt in the same period in 2017. This was pinned on ‘flat’ demand, increased pressure on environmental protection and rising costs of fuel and raw materials. As we mentioned at the time the state-owned company is attempting to cope with the aftermath of China’s great construction boom. National Bureau of Statistics (NBS) data shows that local cement sales dropped by 8% year-on-year to 158Mt in the first nine months of 2018. CNBM’s cement sales are likely to have dropped also so far in 2018 but continuing industry consolidation and/or the merger with Sinoma may save them. With this in mind note the lack of sales volumes figures from CNBM and Anhui Conch in Graph 2 below. 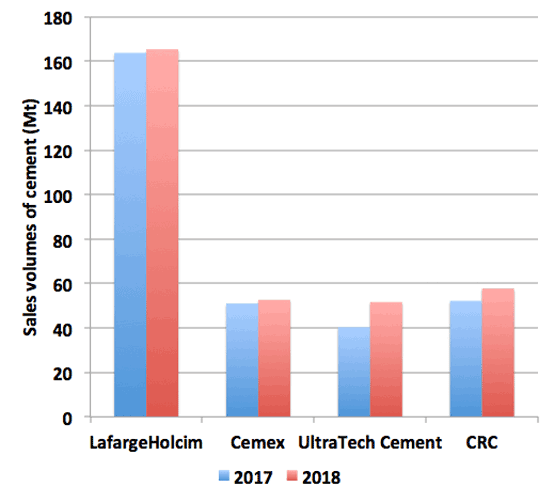 Of the other larger Chinese producers, Anhui Conch’s third quarter report was similarly sparse, sticking to the facts (revenue and profit up) and discussing in more detail a recent large-scale sale and purchase agreement with Jiangsu Conch Building Materials with a value of up to around US$230m. China Resources Cement is typically more verbose in its results releases. Its turnover and profits are also up so far in 2018 but it actually explained that cement and clinker prices had risen by 32%.

Outside of China, LafargeHolcim’s results were mixed in a direct year-on-year comparison but more favourable on a like-for-like basis. Net sales and cement sales volumes are growing slowly but recurring earnings before interest, taxation, depreciation and amortisation (EBITDA) fell very slightly. Growth in Europe and North America was countered by issues in Asia Pacific, Latin America and Middle East Africa. Chief executive Jan Jenisch was more optimistic than at the same point in 2017 with no talk of ‘lacking potential’ and more emphasis on ‘positive momentum.’

As for the others, both Cemex and UltraTech Cement are looking good so far. Growth in Mexico and the US has bolstered Cemex’s performance giving, it a 7% year-on-year boost to US$10.9bn in the first nine months of 2018. Cement sales volumes grew more slowly at 3%, although operating EBITDA remained flat. Part of this was down to poorer markets south of Mexico, notably in Colombia. UltraTech Cement is still looking good after its acquisition of Jaiprakash Associates’ plants in 2017 but earnings and profits have started to decline. The Indian market leader has blamed this on mounting energy and logistics costs coupled with local currency depreciation effects.

So, in summary, generally good news from the big producers, although issues are present in certain markets, notably South America. HeidelbergCement has already set the scene for its third quarter results with a warning that its earnings are down due to poor weather in the US and rising energy costs. Sales volumes and revenue are said to be ‘within expectations.’ Its Indian subsidiary, HeidelbergCement India, reported storming figures for its half-year to the end of September 2018 with double-digit growth across sales, sales volumes and earnings. Less reassuringly, its larger Indonesian subsidiary reported falling sales for the first nine months of 2018. All eyes will be on HeidelbergCement later in the week to see how this plays out.