One of the long running trends in the cement industry is that of production overcapacity. Sure enough more than a few news stories this week covered this, as various players reacted to international trade in clinker and cement. The Bangladesh Cement Manufacturers Association wants its government to cut import duties on clinker. Algeria’s shift from an importing cement nation to an exporting one continues.

Armenia and Afghanistan are coping with influxes of cement imports from neighbouring Iran. Pakistan’s cement exporters, who have been losing ground in Afghanistan, are once again lobbying to remove anti-dumping measures in South Africa. The argument between Hard Rock Cement and Arawak Cement in Barbados may have swung Hard Rock Cement’s way as the Caribbean Court of Justice (CCJ) has ruled in favour of lower tariffs for imports. Last week it was reported that the Rwanda Bureau of Standards had blocked cement imports from Uganda on quality requirement grounds.

The summarised version is that all this excess clinker and cement can cause arguments and market distortions as it finds new markets. Typically, the media reports upon the negative side of this, when the representatives of national industries defend their patch and speak out about ‘quality concerns,’ potential job losses and blows to the local economy. However, it isn’t always like this as the Afghan story shows this week. Here, although the Chamber of Commerce and Industries wants to promote locally produced cement, imports are welcome and the relative merits of different sources are discussed. Ditto the situation in Bangladesh where a predominantly grinding-based industry naturally wants to cut its raw material costs.

We’ve covered clinker and cement exports more than a few times, most recently in September 2018 when the jaw-dropping scale of Vietnam’s exports in 2018 started to become clear. Yet as the continued flow of news stores this week makes clear it’s a topic that never grows old. 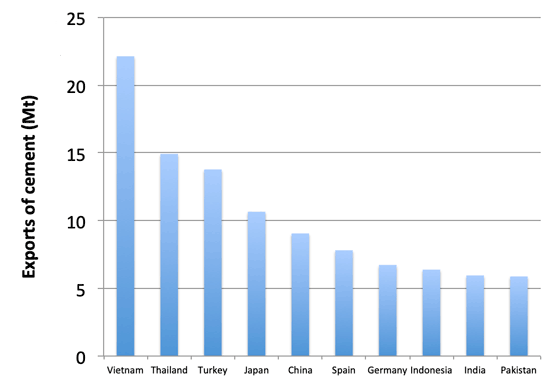 Looking globally raises a number of issues. First, a warning. The data in Graph 1 comes from the International Trade Centre (ITC), a comprehensive source of trade statistics. Most of its figures are in line with data from government bodies and trade associations but its export figure is around a tenth of the estimated export figure for Iran of around 13Mt for its 2018 - 2019 year. Last time this column looked at exports similar issues were noted with a discrepancy between Vietnam’s exports from the ITC compared to government data.

Iran aside, all the usual suspects are present and correct. A point of interest here is that the list is a mixture of countries that make the headlines for their exports, like Vietnam, and those that are quietly just getting on with business. Japan for example exported 10.7Mt in 2018. More telling are the changes in exports from 2017 to 2018. Exports fell in Japan, China and Spain. They rose in Vietnam, Thailand, Indonesia, Pakistan and South Korea.

Looking globally, China is the elephant in the room in this topic given its apparent massive production overcapacity. The industry here is structurally unable to export cement on the scale of other countries but, as its major companies expand internationally, this may change. Despite this China still managed to be the third biggest exporter of cement to the US in 2018 at 2Mt and the fifth biggest in the world. Yet, as the ITC data shows, its exports fell by 30% year-on-year to 9Mt in 2018.

Vietnam, Pakistan and Turkey continue to be some of the key exporting nations with production capacities rising in defiance of domestic realities. Pakistan, for example, is coming off a building boom from the China–Pakistan Economic Corridor infrastructure project and all those plants are now looking for new markets. Vietnam says it is benefitting from industry consolidation in China. Its exports grew by 55% year-on-year rise to 31.6Mt. It shipped 9.8Mt to China in 2018. Its main export markets in 2019 are expected to be the Philippines, Bangladesh, China, Taiwan and Peru. Turkey, meanwhile, struggled with general economic issues in 2018. Its cement exports fell by 6% to 7.5Mt in 2018 according to Turkish Cement Manufacturers Association data. Once again this is at odds with ITC data, which reports nearly twice as many exports.

This touches the tip of the iceberg of a big issue but while production over-capacity continues these kinds of trade arguments will endure. Vietnam, for example, may be enjoying supplying cement in China as that country scales down production. Yet, what will happen to all of those Vietnamese plants once Chinese consumption stabilises?! Similar bear traps lie in wait for the other major exports. Alongside this many of the multinational cement companies are pivoting to concrete production. This may be in recognition of the fact that in a clinker-abundant world profits should be sought elsewhere in the supply chain. A topic for another week.

For an overview of some of these themes and more read Dr Robert McCaffrey’s article ‘The Global Cement Industry in 2050’ in the May 2019 issue of Global Cement Magazine and his forthcoming keynote presentation at the 61st IEEE-IAS/PCA Cement Conference 2019 at St Louis in Missouri, US.