Print this page
Written by David Perilli, Global Cement 01 May 2019

RHI Magnesita has taken the step this week of raising its prices globally by 5% for its products for its industrial and steel divisions. It has applied the increase to both its basic (magnesia and dolomite based) and non-basic products, varying in a range of 3% to 20%. It has blamed this on a global scarcity of raw materials caused mostly by Chinese environmental regulations on mining and processing. It goes on to attribute the issue to increased export taxes, more restrictive allocation of explosives and the nationalisation or controlled consolidation of mining operations in China. All of this has, “...structurally altered the production, pricing and dynamics for industrial minerals.” 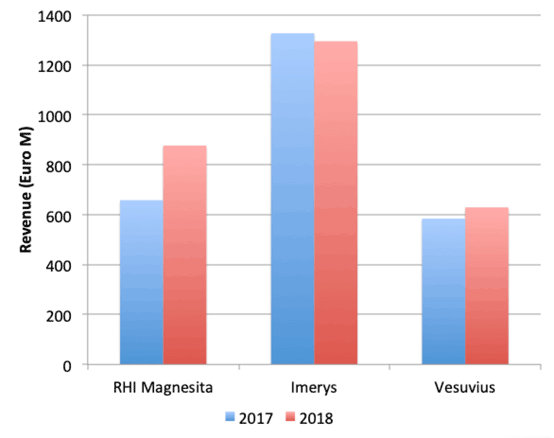 RHI Magnesita noted that 2018 was a year of steady refractory market growth and relative stability for cement and lime from a global market perspective, with some significant variances on a regional basis. Imery’s Energy Solutions & Specialties division suffered due to flat markets. However, its High Resistance Materials division (not shown in Graph 1) benefited from the ongoing integration of Kerneos into the group. The group restructured its businesses at the end of 2018 creating a High Temperature Materials & Solution segment that brings together its various refractory concerns. Vesuvius' Steel Advanced Refractories division, which include monolithic products, reported particular growth in the Americas in 2018. Although it noted some market share loss in North Asia and in certain European countries, the latter due in price increases.

Refractories aren’t the only material or commodity used by the cement industry that has been distorted by Chinese domestic policy. Regulations on imports of waste streams including plastics started in 2017 leading to European and US suppliers struggling to find alternate markets. One implications of this appears to have been waste firms focusing on separating plastic into high and low calorific fractions to fight the downward price trends of a market glut. The outcomes are different but the sheer size and variety of China’s economy is increasingly affecting the cement industry in new and different ways.

RHI Magnesita’s travails in China and the debacle of waste imports bring to mind the quote by the 19th century Austrian diplomat Klemens von Metternic, ‘When Paris sneezes, Europe catches a cold.’ Metternic was referring to Napoleonic-era France and its aftermath. The modern version may have been used to reference the US but maybe it should be instead, ‘When China sneezes, the world catches a cold.’ Gesundheit.

Last modified on 01 May 2019
Published in Analysis
Tagged under