Tourah Cement in Egypt took the tough decision last week to temporarily stop production. It blamed this on an acute financial crisis rendering it unable to pay its running costs. The subsidiary of Germany’s HeidelbergCement was reported in the Global Cement Directory 2019 as already being partly closed. This latest news is regrettable but not surprising. 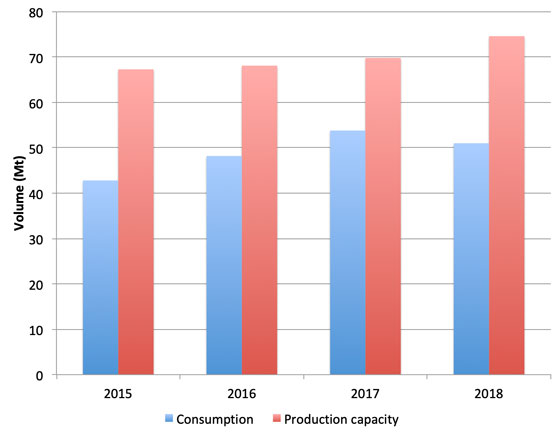 As Graph 1 shows that the backdrop here is of a local cement sector rife with overcapacity. Capacity utilisation rates have hovered around 70% in recent years. The sector breaks down into about a quarter of production capacity under state control and the remainder owned by private companies. Overall, about half of the production capacity is run by multinational companies like Greece’s Titan, France’s Vicat and Germany’s HeidelbergCement.

The country hosts some of the largest cement plants in the world as well as several very big plants by European or North American standards anyway. The whopping 13Mt/yr government/army-run El-Arish Cement plant at Beni Suef opened fully in 2018. It seemed likely that there were going to be losers in the industry following that kind of disruption from a state-owned player. Indeed, Medhat Istvanos, head of the cement division of the Building Materials Chamber of the Federation of Egyptian Industries, explicitly blamed the El-Arish Cement plant for making the situation worse in September 2018. He said that the decision to build the plant was ‘not based on precise information’ and that it had harmed local production.

In the wider picture, the cement sector started to move away from subsidised natural gas and heavy fuel oil to coal instead in the mid-2010s. Tourah Cement mentioned this in its statement about halting production. The government has supported the cement industry through large-scale infrastructure projects and a state-sponsored compensation system under the Contractors Compensation Act that offset the loss prompted by the Egyptian pound’s floatation in 2017.

However, overcapacity has consistently been a problem and this was clear when the El-Arish Cement plant was approved. Exports of cement crept up to 1Mt/yr in 2017 from 0.1Mt/yr in 2015. Yet, as the Low-Carbon Roadmap for the Egyptian Cement Industry pointed out, Egyptian FOB exports of cement cost US$20/t higher than regional competitors such as Turkey. At this kind of disadvantage Egypt lacks the traditional escape route for an overproducing cement sector.

In these kinds of conditions, consolidation appears to be crucial while organic or government-backed demand plays catch-up with the production base. Certainly Egypt has the population and the development potential as its economy grows in the medium to long term. The government stabilising the economy after recent troubles is crucial for the construction industry. In the meantime all is not lost as the focus is on efficiency gains and cost cutting. The growth of alternative fuels as the sector’s fuel mix continues to adjust to the new normal following the abolition of subsidies on natural gas is one example of this.