SNIC, the Brazilian national cement industry union, was being cautious this week but signs of improvement were there. Its cement sales data showed a 3% year-on-year rise to 40.5Mt for the first nine months of 2019 from 39.4Mt in the same period in 2018. SNIC President Paulo Camillo Penna was keen to pour cold water over the figures with a reminder that the truck driver’s strike and an economic slowdown in 2018 had unnaturally depressed industry sales. He didn’t want to ruin the party too much though. Comments followed about a National Confederation of Industry (CNI) survey forecasting growth for the next six months and market research supporting growing residential construction. 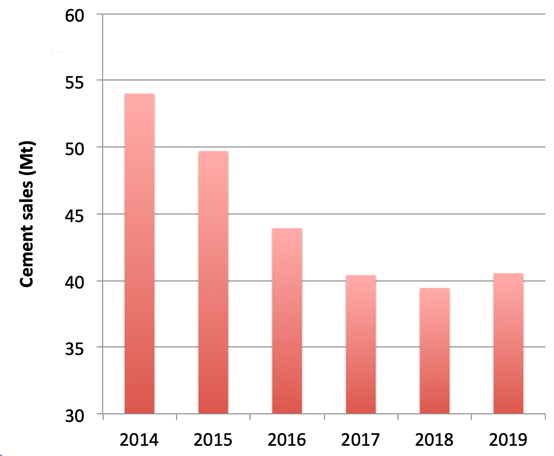 As Graph 1 above shows the local industry has been through the wringer in recent years. Cement sales peaked in 2014 before the national economy was hit by falling commodity and oil prices that contributed to a recession as well as the Petrobras political crisis. At the start of 2017 Camillo Penna described the situation as the worst in the industry’s history. From the peak to the trough cement sales plummeted by 27%.

Camillo Penna’s caution now may have something to do with his previous prediction that the industry was going to recover from the second half of 2018. The sales may not have perked up but merger and acquisition activity did, with the European multinationals Buzzi Unicem and Vicat buying stakes in BCPAR (Grupo Ricardo Brennand) and Cimento Planalto (Ciplan) respectively. So far in 2019 it has been quietly optimistic but not without the odd hiccup. There have been a few new plant project announcements from Brennand Group, Votorantim and CSN Cimentos. Yet, InterCement converted its integrated Pedro Leopoldo plant in Minas Gerais to a terminal. Cimento Tupi reportedly ran into trouble with its investors when it tried to merge with its parent company following defaulting on loan payments in 2018. Notably, the country’s two cement associations also released a Cement Technology Roadmap to 2050 in April 2019. It plans to reduce specific CO2 emissions by over 30% from 2014 to 375kg CO2/t of cement in 2050 amongst other ambitions.

On the corporate side, Votorantim’s domestic sales rose by 3% year-on-year to US$771m in the first half of 2019 from US$745m in the same period in 2018. It attributed the growth to improved prices. Other news of note included the acquisition of a mortar plant in Belém, Pará state and plans to upgrade its clinker grinding unit at Pecém in Ceará. InterCement’s cement and clinker sales volumes rose by 6.8% to 4.04Mt from 3.78Mt. It declared that this was way ahead of the industry average of 1.5%. Sales revenue fell slightly, possibly due to high production overcapacity and competition on prices. Earnings were also reported as having improved in the second quarter partly due to a ‘significant’ reduction in its cost structure.

On the supplier side, refractory manufacturer RHI Magnesita reported that its margin recovery was ‘going quite well’ in Brazil during the first half of 2019. Stefan Borgas, RHI Magnesita’s chief executive officer (CEO) forecast that the margin in that country would help drive its business in the second half of 2019 and that the business was returning to the global average. RHI Magnesita also announced a Euro57.1m upgrade to its plant at Contagem, Belo Horizonte in Minas Gerais this week, including building a new regional headquarters for its South American business.

Everything seems to be coming together slowly for Brazil’s cement industry. Yet Camillo Penna and SNIC are right to be careful for another reason. The United Nations (UN) and various analysts are warning about the growing risk of global recession in 2020 based on indicators like the US yield curve. This could be especially devastating for an economy like Brazil’s that is heavily dependent on commodity markets. History may not repeat itself but the strength of that recovery may be tested sooner than anyone would like.