Rwanda’s newest cement grinding plant is set to start commissioning at a great time. Last week Milbridge Group subsidiary Prime Cement said that its 0.6Mt/yr grinding plant in Musanze, Northern Province was preparing to start up in August 2020. This week the main local producer, Cimerwa, announced that it was setting standardised cement prices in an attempt to control speculation in the market following a shortage. According to local press, spikes in prices have been caused by an urgent supply tender from the Ministry of Education, which has started a large-scale project to build over 20,000 classrooms. Prime Cement is unlikely to make a difference to this particular shortage but its timing is spot on. 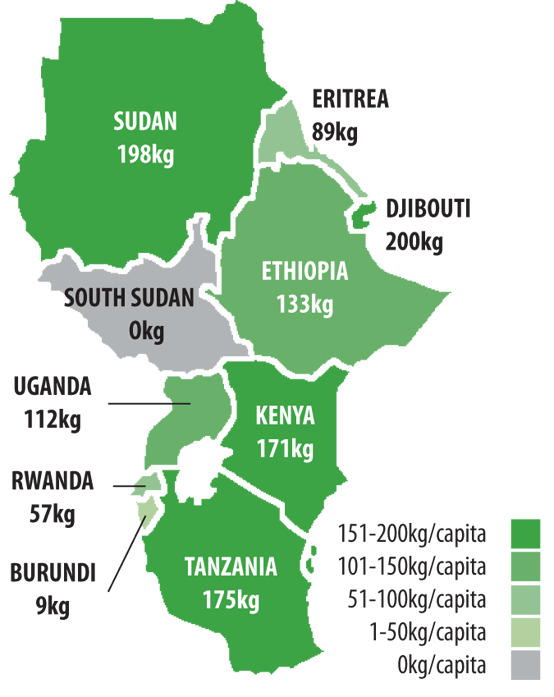 Cement price surges in land-locked African countries crying out for construction materials are not new but it’s always illuminating to review how the situation is changing. Rwanda’s sole 0.6Mt/yr integrated plant is run by Cimerwa, a subsidiary of South Africa-based PPC, near Bugarama in the south-west of the country, close to the borders with Democratic Republic of the Congo (DRC) and Burundi. The new grinding plant is located in the north-west near the borders with DRC and Uganda. It will join another grinding plant run by Kenya’s ARM Cement at Kigali.

PPC’s operation in Rwanda has performed well in comparison to a poor market back home in South Africa. For its financial half year to September 2019 Cimerwa reported revenue growth of 28% year-on-year to US$31.2m due to a 20% increase in sales volumes. Earnings rose even more in percentage terms due to higher volumes and an improved cost per tonne performance, likely due to a debottlenecking project. More recently, PPC said that its operations in Rwanda were disrupted in April 2020 due to a coronavirus lockdown that started in late March 2020. It partially resumed operations in the second half of April 2020 with cement sales volumes for the month expected to be 15 - 20% of those in April 2019. The other point of note is that the Rwandan government was trying to sell its minority share in Cimerwa in mid-2019 but nothing has been publicly announced since then. However, Cimerwa was reported as being in the process of listing on the Rwanda Stock Exchange in May 2020.

Rwanda’s other grinding plant at Kigali has had problems with its parent company in Kenya. ARM Cement went into administration in mid-2018 and its assets have gradually been sold off since then amidst legal wrangling. It has also had ongoing operational issues with interrupted production due to clinker and coal shortages caused by import issues with Tanzania. An attempt to sell the 0.1Mt/yr grinding plant in September 2018 failed when an auction didn’t even reach one tenth of the estimated market value of US$1.4m. The plant was still reportedly on sale in May 2020.

The new Prime Cement grinding plant will have a production capacity of 0.6Mt/yr. It has been supplied by Germany-based Loesche, who installed a Loesche Jumbo CCG (Compact Cement Grinding plant) with mill type LM 30.2. The project has been reported to have a cost of around US$65m. A second phase was also mentioned at the time of the initial announcement that might include upgrading the grinding plant to a fully-integrated one at a later stage. Time will tell. In the meantime though it will be interesting to see whether the new plant has the same raw material issues that ARM’s Kigali Cement has had. One potential source of clinker is the integrated Hima Cement at Kasese in Uganda. Bamburi Cement reported in May 2020 that its Hima Cement subsidiary in Uganda was unable to ‘access’ the market in Rwanda in 2019 due to ongoing trade problems across the Rwanda-Uganda border.

Rwanda’s cement consumption has been reported to be 0.7Mt/yr so a new combined national production capacity of 1.4Mt/yr seems likely to create significant exports. Other countries in the region have also noticed what’s going on in Rwanda and want to do likewise. In June 2020 DRC’s Industry Minister Julien Paluku talked up plans of reviving the 0.3Mt/yr state-owned National Cement Plant (CINAT) in Kimpese. He noted that DRC has been partly reliant on cement produced by Cimerwa in Rwanda, which has been serving a combined demand of 900,000t/yr in DRC and Burundi.

A statistic that received a fresh airing this week was one from the World Bank in 2016 that worked out that the price of cement in Africa was on average 183% higher than the global average. It popped up in a news article about the expanding Nigerian cement industry but it applies to the whole continent. While it continues to hold true, exports will boom and plants will keep being built in the places that exports can’t reach.

Last modified on 01 September 2020
Published in Analysis
Tagged under