In the two and a half years since Calix brought together cement producers across corporate and national boundaries to form the first Low Emissions Intensity Lime And Cement (LEILAC-1) consortium and commissioned a carbon capture installation at the Lixhe cement plant in Belgium on 10 May 2019, carbon capture and storage (CCS) has passed some major milestones. New installations have made Global Cement headlines from Canada (at Lehigh Cement’s Edmonton plant in November 2019) to China (at a China National Building Material (CNBM) plant in July 2021). Twelve other European cement plants now host current or planned carbon capture trials – including the first full-scale system, at HeidelbergCement’sBrevik plant in Norway. A second Calix-led project in Germany, LEILAC-2, attracted Euro16m-worth of funding from the European Union in April 2020.

The work of LEILAC-1 – backed by HeidelbergCement, Cemex, Lhoist, Tarmac and others, with Euro12m in funding – set the benchmark in innovation. Its pilot plant successfully captured 100% of 'unavoidable' process emissions by indirectly heating raw materials inside a vertical steel tube. Called direct capture, the model removes a CO2 separation step, as our subsequent price analysis will reflect.

In October 2021, the LEILAC-1 consortium published its report of the concluded Lixhe trial. It described the three-fold key successes of the study:

1) Both limestone and raw meal may be processed;

Additionally, Calix’s first departure into the cement sector has demonstrated that its model exhibits no operational deterioration, does not suffer from material build-up and has no impact on the host plant when used in cement production. The plant’s clinker capacity remained the same as before the trial. Most importantly of all, the Lixhe cement plant recorded no process safety incidents throughout the duration of the trial.

The study has also put an evidence-based price tag on industrial-scale CCS at a cement plant for the first time: Euro36.84/t. Figure 1 (below) plots the full-cycle costs of three different carbon capture installations at retrofitted 1Mt/yr cement plants using 100% RDF, including projections for transport and storage. Installation 1 is an amine-based carbon capture system of the kind installed in the Brevik cement plant’s exhaust stack; Installation 2 is the Calix direct capture system and Installation 3 consists of both systems in combination. Direct capture’s costs are the lowest, while the amine retrofit and the combination installation are close behind at Euro43.68/t and Euro43.25/t respectively. 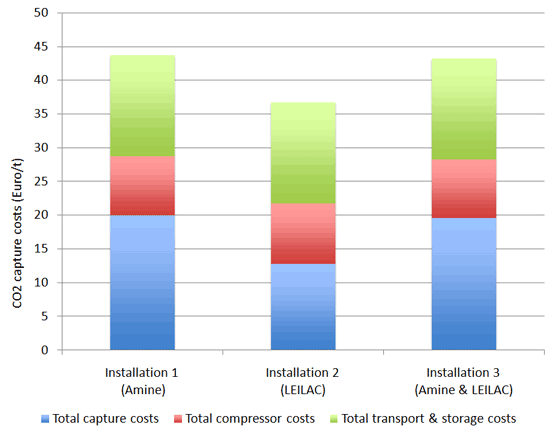 Installations 1 and 3 both entail additional energy requirements for the separation of CO2 from flue gases and air. With the inclusion of the CO2 produced thereby, the cost of Installation 1 rises to Euro94/t of net CO2 emissions eliminated, more than double that of Installation 2 at Euro38.21/t. The combination of the two in Installation 3 costs Euro67.3/t, 76% more than direct capture alone. Figure 2 (below), breaks down the carbon avoidance costs for each one and compares them. 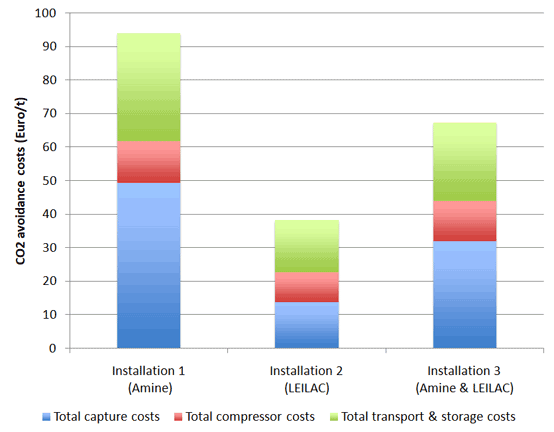 The Global Cement and Concrete Association (GCCA)’s seven-point Roadmap to Net Zero strategy puts CCS at the forefront of concrete sector decarbonisation. CCS is expected to eliminate an increasing share of global concrete’s CO2 emissions, rising to 36% in 2050 – by then 1.37Bnt of a total 3.81Bnt. This will depend on affordability. Calix’s model has reduced the capital expenditure (CAPEX) of a carbon capture retrofit by 72% to Euro34m from Euro98m for the amine-based equivalent. When built as part of a new plant, the CAPEX further lowers to Euro27m. Both models may also be retrofitted together, for Euro99m. In future, Calix expects to install direct capture systems capable ofachieving Euro22/t of captured CO2. By contrast, the cost of emitting 1t of CO2 in the EU on 11 October 2021 was Euro59.15.

In what it calls the Decade to Deliver, the GCCA aims to achieve a 25% CO2 emissions reduction in global concrete production between 2020 and 2030, in which CCS plays only a minor part of less than 5%. LEILAC-1 presents a visionof affordable carbon avoidance which complements cement companies’ 2030 CO2 reduction aspirations.

Unlike conventional CCS methods, however, direct capture only does two thirds of a job – eliminating the emissions of calcination, but not combustion. This would appear to make it unsuited to cement’s longer-term aim of carbon neutrality by 2050 in line with the Paris Climate Accords’ 2°C warming scenario. On the other hand, direct capture is not designed to work alone. Calix recommends use of the technology in conjunction with a decarbonised fuel stream to eliminate the plant’s remaining direct emissions. This increases the price - by 47% to Euro56.05/t of CO2 avoided for biomassand by more than double to Euro104.48/t for an E-kiln.

The Lixhe cement plant’s carbon capture story is one of a successful crossover from one industry into another: Calix previously applied the technology in the Australian magnesite sector. Realisation of the Calix carbon capture vision in the global cement industry is a challenge primarily due to the scale of the task. It will require continued collaboration between companies and with partners outside of the industry. Further than this, parliaments must continue to enact legislation to make emission mitigation the economic choice for producers.

Last modified on 14 October 2021
Published in Analysis
Tagged under