More positive news emerged from the UK cement industry this week with the news that Cemex is planning to restart the second kiln at its South Ferriby plant later in 2018. This marks the full recovery of the plant after a disastrous flood in late 2013 and it is an all round good news story. Around the same time the local government in Scotland approved the planning application for an upgrade to Tarmac’s Dunbar cement plant. That project involves installing a new cement grinding mill, a new cement storage silo and a rail loading facility. 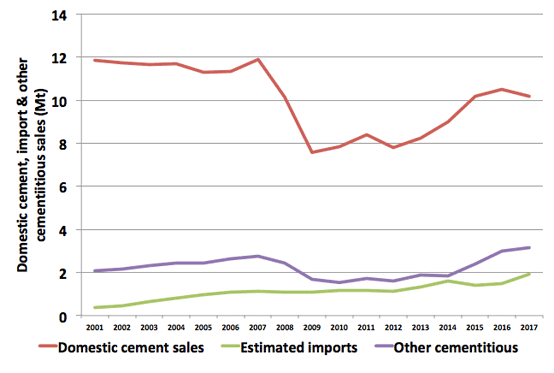 The timing is interesting given the general uncertainty in the UK economy ahead of the UK exit from the European Union (EU). However, data from the Mineral Products Association (MPA) shows that total cementitious material sales (cement plus products made from fly ash and ground granulated blast furnace slag (GGBS)) reached 15.3Mt in 2017 from a low of 10.3Mt in 2009 following the financial crash. This isn’t as high as the 15.8Mt figures recorded in 2007 but it does mark a recovery. This masks to an extent the change in the market since 2007. Cement sales in 2017 at 10.2Mt were still below a high of 11.9Mt in 2008. The recovery has been driven by higher imports, 1.9Mt in 2017, and higher use of fly ash and GGBS products, which reached 3.2Mt in 2017.

Cemex and Tarmac are not alone in announcing projects. HeidelbergCement’s local subsidiary Hanson is upgrading its Padeswood plant with a new Euro22m mill. Irish slag cement grinding company Ecocem opened its import terminal at Sheerness in mid-2017 and French grinding firm, Cem'In'Eu, has also expressed interest in building a plant, in this case in London.

As discussed earlier in the year, new upgrade projects in the UK appear to carry an element of risk given the unknown status of its departure from the EU. Supply chains may be affected, companies are delaying investment and the value of Pound Sterling is falling. The collapse of construction services company Carillion also had a knock-on effect in the industry and, with major work on the Crossrail infrastructure project finishing, the industry has no major infrastructure projects in support. A quarterly graph of UK construction industry output volume by Arcadis shows almost uniform growth since mid-2012 although this started to flatten in 2017. A badly-handled Brexit (UK exit from the EU) could undo this growth.

All of this presents a picture of risk-adverse capital projects in the UK. The MPA figures help to explain the focus on grinding at Padeswood and Dunbar. The market has changed since 2007, with a growing focus on imports and secondary cementitious materials. Hence spending money on equipment to process these inputs makes sense. The decision to increase production at South Ferriby meanwhile depends on reviving existing equipment. Regional cement sales figures to 2016 from the MPA appear to indicate static demand in counties close to the plant (Yorkshire and Humberside) but sales have increased in the East Midlands and the East of England.

Just compare the current UK approach to the situation in Egypt. This week the head of the cement division of the Chamber of Building Materials described the decision to build the Beni Suef cement plant to local media as “not based on precise information” and that it had harmed local production. In case you had forgotten, that plant is one of the biggest in the world with six lines. The commentator may well have been representing smaller local producers but opening a 12Mt/yr plant in Egypt in these turbulent economic times marks a different approach to risk than the modest plant upgrades in the UK. Let’s wait and see who has the best approach.

Last modified on 26 September 2018
Published in Analysis
Tagged under