One news story to note recently has been Cemex’s decision to recommission a kiln in Mexico to address cement shortages in the southwest US. In early February 2021 the Mexico-based producer said it was spending US$15m to restart a 1Mt/yr kiln at its CPN cement plant in Hermosillo, Sonora. The unit is over 250km from the US border but Cemex said it was making the investment to cope with cement shortages and project delays in California, Arizona and Nevada. At present it supplies over 3Mt/yr to California, Arizona, and Nevada from its integrated plant in Victorville, California and via sea-borne imports. Efficiency improvements at Victorville and other unspecified supply chain changes are also planned.

Cemex isn’t the only company with an eye on the south-west US. Around the same time Japan-based Taiheiyo Cement concluded its deal with Semen Indonesia to buy a 15% stake in its subsidiary Solusi Bangun Indonesia (SBI) for around US$220m. It’s a long way from Arizona but the related statement mentioned plans to make SBI’s integrated Tuban plant in East Java more export focused, with the construction of a new jetty and silos. It intends to export 0.5Mt/yr of cement to Taiheiyo Cement’s business in the US. Its local subsidiary, CalPortland, runs two integrated plants in California and one in Arizona. 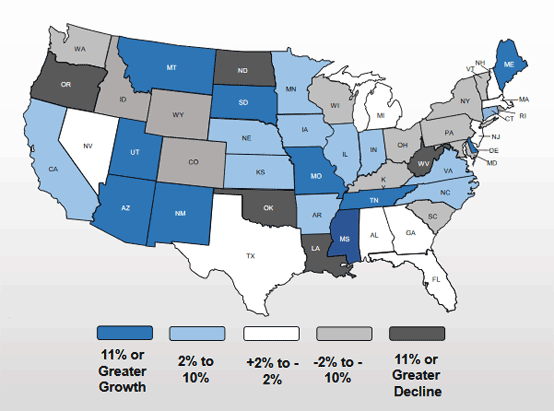 In its recent winter forecasts the Portland Cement Association (PCA) reported that the Mountain region of the US recorded the highest growth in cement consumption in 2020, at 10%, due to underlying economic fundamentals and favourable demographic trends. Data from the United States Geological Survey (USGS) supports Cemex’s view too. Ordinary Portland Cement and blended cement shipments rose by 21% year-on-year to 2.74Mt in Arizona and New Mexico in the first 11 months of 2020 from 2.28Mt in the same period in 2019. This doesn’t quite tally in California where shipments fell slightly, by 0.8%, to 9.42Mt. However, it reported 12% growth to 2.38Mt in the first quarter of 2020, suggesting that the market could return sharply once the coronavirus epidemic is better under control. Overall, shipments in the US grew by 1.03% to 82.3Mt in the first 11 months of 2020, driven by growth in central regions. The PCA expects national cement consumption to grow by about 1% in 2021 with a ‘robust’ recovery driven by residential housing but slowed by uncertain coronavirus vaccination supplies and general market volatility.

In a world with too much clinker production capacity, it stands out to see two established producers so visibly chasing market share in a mature market. Rather than building new plants, both Cemex and Taiheiyo Cement are using or reviving existing production lines in other countries, and building import strategies as well as optimising their existing facilities in the regions. With the western building material multinationals now often looking to focus on ‘safe’ markets in Europe or North America the fight to grow market share in these regions is likely to become more intense. It also complicates decisions about when or if an existing plant should be mothballed or shut. After all, Cemex’s old production line in Hermosillo is about to become very useful indeed.

Last modified on 17 February 2021
Published in Analysis
Tagged under