2021 roundup for the cement multinationals

Cement markets have mostly recovered following the shock emergence of coronavirus in 2020. Most of the producers that have released their results so far for 2021 have reported strong boosts to sales revenue and racing earnings as something more like normality resumed. The following roundup covers a selective group of cement companies around the world.

The recovery in 2021 has made the outliers in the companies covered here noteworthy. UltraTech Cement, Semen Indonesia and Dangote Cement are all large regional companies with dominant positions domestically and varying degrees of international spread. As can be seen in Graph 1, UltraTech Cement and Dangote Cement both reported very large increases in sales, over 20% year-on-year. By contrast, Semen Indonesia sales fell very slightly. 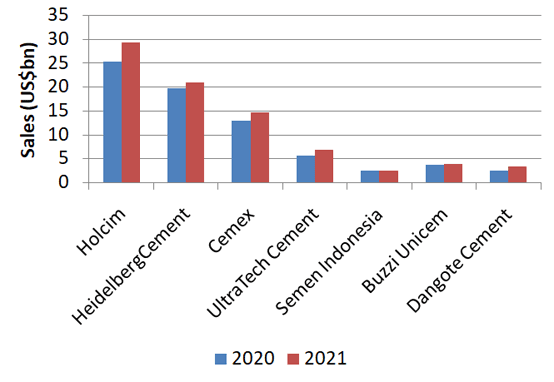 One reason for UltraTech Cement and Dangote Cement’s success can be seen in Graph 2 (below). Both companies managed to sell more cement in 2021. Semen Indonesia did not due to Indonesia’s production overcapacity and new competitors. It also blamed a significant rises in coal prices for a 9% drop in its earnings before interest, taxation, depreciation and amortisation (EBITDA).

UltraTech Cement has been wary of successive waves of coronavirus throughout its 2022 financial year, but generally the Indian regional markets have recovered and government-backed rural housing and infrastructure spending have supported growth. It did note rising coal prices earlier in the year, but these were reported to have somewhat softened during the quarter to 31 December 2021. It is worth noting that the ongoing war in Ukraine is affecting energy markets but more on this at the end of this article. Dangote Cement’s performance was slowed somewhat by the start of coronavirus but it has since resumed its turbo-charged trajectory with volumes, revenue and earnings growth all above 10% in 2021. Mostly this performance is supported by the Nigerian market but the company is doing well internationally too. 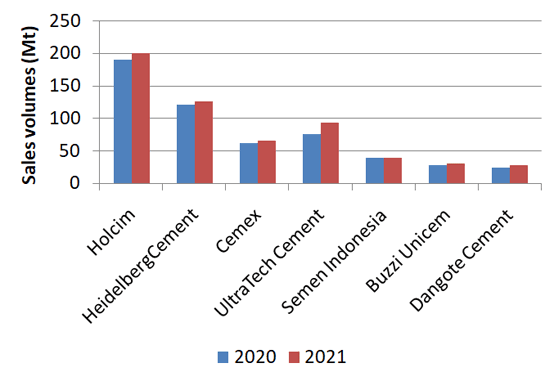 Holcim and HeidelbergCement’s increase in sales revenue in 2021 are actually fairly similar on a like-for-like basis, both with around 10%. The former’s sales volumes were up across cement, ready-mixed concrete and aggregates in each of its regions around the world, as were sales revenue. Holcim’s big move in 2021 has been the expansion of its Solutions & Products segment with the acquisition of Firestone in April 2021. Now this has continued with the completion of the Malarkey Roofing Products purchase on 1 March 2022, a few days after it released its 2021 results. Chief executive officer Jan Jenisch described the move towards lightweight building materials as generating, “further double-digit growth engines for the company.” As an aside, it was fascinating to see CRH leave the building envelope business this week, mostly based in the US, with an agreement to sell up its division for US$3.8bn to private equity. The business CRH is divesting sells architectural glass, storefront systems, architectural glazing systems and related hardware to customers primarily in North America. CRH is clearly pursuing a different business strategy to Holcim.

HeidelbergCement has also reported a strong year in 2021 albeit without the Holcim razzle-dazzle of barging into new market areas. It noted significant increases in energy prices and pandemic‐related lockdowns in some key markets in Asia. It described a very slight cement sales volume decline in Africa and the Middle East and a drop in earnings in Asia. Its trump cards are its carbon capture projects coming down the pipeline. It’s keen to remind investors about this with the unspoken implication that it might save the company money in the future when carbon taxes bite further.

Both Cemex and Buzzi Unicem followed the growth pattern seen in sales and earnings by the other larger multinational producers covered above. Central and South American markets really took off for Cemex in 2021, starting with its home market in Mexico. However, growth was present, although slower, in both its largest markets in the US and its Europe, Middle East, Africa and Asia region. Notably cement volumes in the Philippines grew by 7% and that’s even with the devastation caused by typhoons at the end of the year taken into account. Similarly, Buzzi Unicem performed well in 2021 due to growth in Italy, the US and Eastern Europe compensating for a small sales decline in Germany. As mentioned in Update on Ukraine, February 2022 Buzzi Unicem has particular exposure to the war in Ukraine as it operates two cement plants in Ukraine and two units in Russia but this is a problem for the 2022 financial year.

To finish on Ukraine, first and foremost, a human tragedy is unfolding. Yet the war also presents many economic challenges to financial markets through sanctions and counter-actions. A recession in Russia looks likely as do energy price surges in the US and Europe leading to further inflation and, perhaps, recessions too. All this potentially lies ahead. For now, the dilemma for US and European-based cement companies and suppliers with operations in Russia is reputational. Should they continue to do business in Russia as public opinion hardens and companies like BP, Shell, Equinor, HSBC and AerCap head for the exit? The Russian government has blocked foreign companies and individuals from selling shares locally but pressure looks set to intensify for such companies to do something.

Last modified on 28 March 2022
Published in Analysis
Tagged under